Have just released the 0.541 update, which fixes a couple of issues found on 0.54, and gives a better version of the path builder mesh. 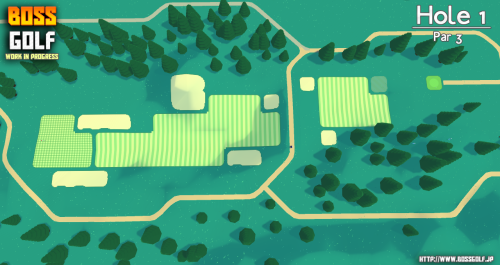 Here’s the main points of change:

That’s all for now.

The Path tool will stay the way it is now, while I get to work on the new hole builder. You’ll plan out the hole all at once creating a kind of “yardage book” representation of it, placing the terrain tiles and whatnot, and then giving the order for it to be built. Any alteration you wish to do to the hole, will be done through its yardage book. This way you’ll also be able to save/load previously created yardage books!

And since in golf you can have multiple teeing locations, so will be the case in Boss Golf! No longer will you be constrained about simply placing the tee tile; you’ll be placing the tee object instead. Coming in 5 different colors, that mark the level of difficulty of a tee.

The same will be doable with the hole! You’ll now lay down the green are as you wish, and then place the hole object in the location you desire, giving you more options for customizing your hole.

Oh and as a bonus, next week is the famous Golden Week here in Japan. Meaning I’ll be crunching down to get the game to a great state to show off in May’s BitSummit! If you’re in Japan during that time, be sure to drop by and say hello! And play the exclusive resort featured at the event!

It’s available in the same place as usual. (If you haven’t signed up for the alpha, you can do so here!)

The main focus of this update was getting the new path system in the game, and it has been implemented. Comes with 6 different types of path you can use. Later on, I’ll add the ability to choose the width too.

As well as the brand spanking new UI that I’ve talked about in a previous post! Give it a try, and let me know how it feels!

As always, bugs are to be expected and whatnot. I’d love if you guys could let me know of any issues you find, or features you’d like to see in the game! Our Reddit is a great place for it, so is our Discord channel!