For this update, you now have some brand new tools for making water in your golf resort! 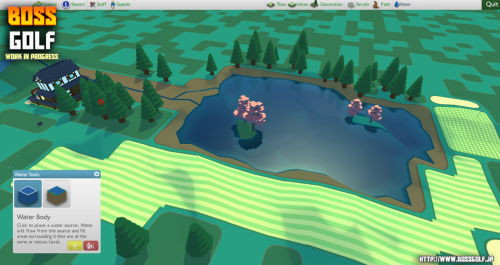 In the water panel, you are able to either add bodies of water, or rivers. (Waterfalls will come later).

This is just a fancy way of saying lakes, ponds, whathave you. Simply dig up an area with the height tools, select the water tool, and then click on any point you wish to create your pond. It will automatically detect the area to be filled, and preview what the pond will look like.

After it’s done, you can adjust the height to suit what you need, or just straight up delete it!

Rivers work similar to the path tool. You simply click and drag, and a river will be created. Currently, you are also able to choose the width of the stream you are making!

To delete it, simply select the bulldozer, and erase the river whole.

As this water tool is still a work in progress, the AI isn’t reacting perfectly to it yet. It’ll try to walk over it, and may get stuck if the trench is too deep. You can always use the pick up tool to grab a problematic AI, and move them out of the way. For 0.65, AI will receive a nice overhaul to make ti more reactive!

Some other minor fixes included in this build:

That’s it for now, folks!

As mentioned, 0.65 will be about AI and improving their systems. Afterwards, it’ll be 0.7 with the tools for creating new buildings for the resort! So stay tuned for more, and don’t forget to wishlist Boss Golf!

It took a little longer than I expected, but the closed alpha for Boss Golf has been updated to 0.4! 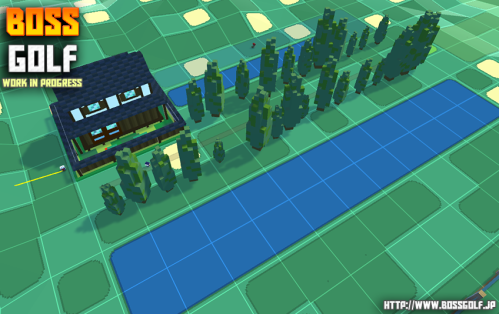 Some of the changes included in this update:

Because of the array of changes in this version, your 0.3 save change won’t be compatible with this new release. It would take me a lot of precious time to create a save converter at this moment.

The changes in decoration are quite massive, though. The previous system will still be used for the scenario editor, where you just really wanna sketch out the level for your scenario. But this new one gives you a lot more control over placement, so that you can really customize things to your liking. If you have any request for tools or feedback, feel free to comment on our reddit or our discord!

So that’s it for 0.4. It drastically changed the flow of gameplay, slowing things down quite a bit, and implemented a host of systems that I’ll take full advantage of in development.

For 0.5, I’m going to focus on the AI again, giving them proper ways of evaluating/thinking a hole, more behaviors, more character generation, and a couple more things I wanna keep under wraps for now! Timing for 0.5 is early March.

Today’s update is about the clubhouse, the first building available in Boss Golf! 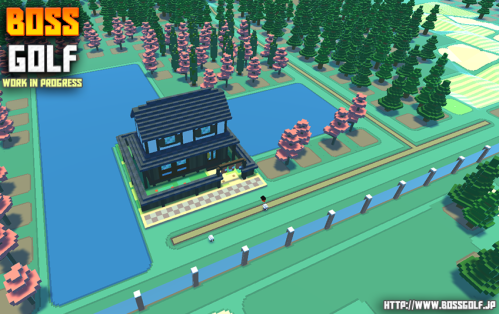 The main function of the building is controlling AI access to the course. It knows which AI is currently playing, the capacity for people on the course (which will be tweakable later), and decides when to spawn a new player. In the screenshot above, you can see 3 AI golfers just loitering around the clubhouse, as their idling/golfing routines haven’t kicked in yet!

As the gameplay systems expand, you’ll be able to tweak membership, decide on prices, course opening hours, all sorts of little things through this main building, as well as expand it, change its appearance and whatnot.

For 0.3, I’m working on the saving system and on blending the player golf gameplay with the AI golf gameplay. Your character will have to queue up for the hole like any AI character does, and you’ll get a notification letting you know when your turn is up! With the save/loading, you’ll be able to continue working on your course as the alpha progresses too!

That’s all for now, folks! Hope you have a great new year!

To break the silence today, I’ll talk about the sketching of the AI of the golfers in Boss Golf, something that I’ve been working on over the past week!

I have a great interest in AI, being an AI programmer professionally, so for Boss Golf I want to create some very interesting things with AI, to reinforce the living feeling of the NPCs, as well as give rise to the unpredictable events in the game.

To start off, I’ll describe the main backbone of the AI in Boss Golf: State Machines.

State Machines are basically a set of nodes that determine the current state of the AI (sleeping, idling etc), and how they transition into each other based on set instructions. How/when these transitions happen are decided by the programmer.

For Boss Golf, since gameplay is very segmented, state machines will be used to determine the basic state that the AI is in. Some of these states include, but are not limited to; teeing, putting, approaching, idling, waiting, interacting, resting, moving. The more expanded the state machine is, the more different and interesting behaviors we can get out of the AI.

For example: why separate the act of playing golf into three separate states? (Teeing, Approaching, Puttting) They could easily be condensed into one “playing” state since the actions that the AI will perform are very similar. (moving and hitting the ball)

The answer is that by adding this degree of separation to the behavior, we can have the AI interact and respond differently to events that happen at different points of play, in a more neat or organized way. If rain interrupts play during teeing off, it’ll have less impact on a golfer’s mentality than if he was putting; the stakes are different. Instead of having to keep track of how many strokes he has and how close he is to the hole, we can simply query the current state, and make the AI react accordingly.

And that’s just on one particular possible event. When you combine with other events, and add layers of actions and behaviors, you end up with a more interesting AI rather than one that simple goes around hitting the ball.

We can even add some variety to the transitions based on randomness or the attributes of the AI character. A golfer with poor health/lower stamina may have a bigger chance of switching to the rest state after a hole than a golfer in better health; a golfer with more aggressiveness maybhave a bigger chance of switching to a raging state after a failed easy shot than a calmer golfer.

And that’s the basics of it. I’ve sketched out some basic states that need to be in the game, and am in the process of implementing them. With state machines, we can also add new states at any point in time since they are self contained, so expanding the AI can be done quite easily.

Next time I’ll talk about another aspect of the AI that requires more difficult work to get it working correctly: Utility Functions.

That’s all for today folks!

I’m happy to announce that the Boss Golf demo is now also available for Linux!

Download information, as always, available on our Demo page.

Any issues you find, don’t be afraid to contact us either using the contact form, or by visiting our subreddit.

Now, back to work!