Or do, it’s your golf course!

Today’s update is a simple but functional one: We now have walls surrounding your golf course, which will let you know more clearly the limits of your course. The wall is generated automatically when the game starts, and it is updated automatically if you edit the terrain around it.

However, because the AI pathfinding is still not completely implemented, the AI will simply walk through it. Like a Boss. Golf. That will be remedied over the weekend, as I integrate a simple pathfinding system to stop the AI from trying to go to places where it shouldn’t try to go, such as the water, through a tree etc. I’ll also create the path object that you can place on the tiles to allow your AI to make smarter decisions when navigating the course.

That’s all for today, folks!

I’ve updated the game to add the day-night cycle feature, as well as fixing an issue where the ball would be shot into oblivion if you shot it uphill/at an incline or something.

The shot curve visualizer thing isn’t perfect; but the shots no longer bug out. Or shouldn’t!

In any case, go ahead and try out the demo! Available here as usual! Both Mac and Windows versions available.

Oh and we’ll be adding Linux support for the demo pretty soon!

Here’s two nice holes I built with the current version of Boss Golf!

Fear of the Dusk 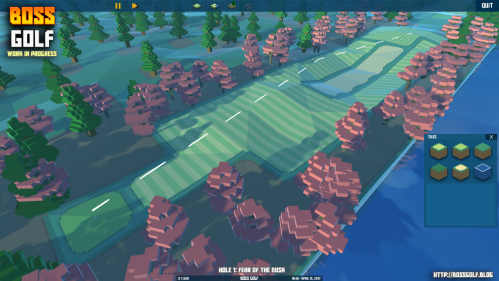 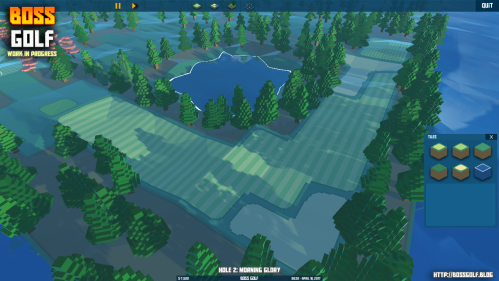 Next on the list is a reworking of the play/golf hole panel, giving you better/more interesting information regarding the hole, as well as the possibility to open it up for AI play. Which will be implemented later this month, at least at a basic level!

Today I wanted to release a new demo with the newly improved terrain and water system, but I had a change of heart.

The upgraded terrain is done and implemented, connected to the hole system and all. Also added a sketch of the boundary system that will generate the “out of bounds” area around the buildable area. This will be expanded upon later, during polish, as I want it to be done well.

So for next steps, there’s two main tasks on the current list: Scenario Editor and Golf Gameplay

This feature will allow me (and others) to design the rules and basic outline of a scenario for the game. I’ll be using this tool to make the main missions in the game, as well as allow others to use it to make custom stuff. You’ll be able to select goals, starting conditions, limitations, sizes etc.

This is the actual gameplay of playing a round of golf around the course. It allows you to select types of shots, and select where you’d like to try and hit it. Depending on your golfer skill, you’ll be more or less accurate with your shot. Depending on the terrain, your shot may also bounce, roll etc. I want to make the act of playing golf more about the strategy of it rather than pressing a button at the correct time and whatnot.

So, with these two main tasks at hand, I had to make a decision. And I did:

We’re going with Golf Gameplay! This way you’ll be able to build your holes, and attempt playing them and see how well you do! So a basic playable version of this will be the target for next weekend!

And I’ll leave you with a course I built: